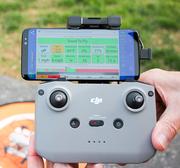 If you go to the Grattan Price Drive villas early some morning when the sun is just coming up and the wind is calm, you might just come across a drone “pilot” practicing maneuvers with his craft. A few months ago, Tom Harkins got a drone and since then has been practicing flying it in Sunnyside’s airspace. He carefully lets the drone take off, and then makes it dip and weave over villas and cottages, as it makes a noise like an angry (and extremely large) mosquito. Then Tom brings the drone home, landing it as gently as a baby nestling into a basket.

Tom originally got interested in drones of a larger variety back in the 80s, when the Israeli army developed combat drones or battlefield UAVs (Unmanned Aerial Vehicles). In the last decade or so, of course, a very different kind of drone has become commercially popular, and in the past two years this popularity has exploded. The biggest maker of “hobby” drones is DJI (or Da-Jiang Innovations), a Chinese company that currently dominates the international market. Tom flies a DJI Mini 2, one of their most popular models. Before Tom decided on this model, he did a lot of research, and recommends that anyone who’s considering getting a drone do the same.

Tom was looking for a “reasonably priced” drone with some specific capabilities, including a good camera with a 3-axis motorized gimbal. This means that if the drone yaws and pitches in the wind, the camera remains relatively steady. The Mini 2 has a maximum flight time of 31 minutes and a maximum speed of 36 mph. Its maximum operating height is 400 feet, though this is determined by FAA regulations, and it has a maximum operating distance of about 6 miles.

Tom loves flying his drone. “I find it exciting,” he says, “and I use the camera almost every time I fly.” He finds the most difficult thing to master is the hand-eye coordination needed for the controls, though he believes his video-gaming experience helps with this. Tom’s drone can take jpeg images and shoot in mp4 video format though it doesn’t, like more expensive ones, shoot infrared photography. “One of the most important things to decide before you consider getting a drone,” Tom explains, “is what kind of camera you need and what kinds of pictures or videos you want to take—and how much you’re willing to spend.” Because the camera is capable of taking panorama pictures and spectacular video, he hopes to help Sunnyside Marketing use some of the footage he shoots to promote our community.

To Top of Page