A Confederate Spy at the Shenandoah Valley Civil War Round Table

The Shenandoah Valley Civil War Round Table (SVCWRT) had its first in-person meeting since the COVID lockdowns on July 12th, 7:30pm in the Sunnyside Room. This group, which meets every two months, gathers for presentations on various topics about the Civil War and is open to any who have an interest. This meeting was a re-enactment of the Confederate Spy Rose O’Neal Greenhow. She was portrayed by Emily Lapisardi, an accomplished singer, actor, dancer and pianist who has also presented historical impersonations in nine states and the District of Columbia. Her accomplishments have taken her all over the world and she gave a stunning performance of a nineteenth century woman who was dedicated to the South.

Rose O’Neal Greenhow was born in Maryland and when her father died, her mother moved the family to Washington, D.C. Over time, she befriended many influential politicians, including President James Buchanan and South Carolina Senator John C. Calhoun. Calhoun played a role in shaping Greenhow's dedication to the South. In 1835, she married Dr. Robert Greenhow, and in 1854, she became a widow.

Greenhow was a strong Southern supporter and obtained information from important visitors to her home. She then passed this on to the Confederacy through various means, such as having a young woman named Betty Duvall carried a message wrapped in a tiny black silk purse and wound up in a bun of her hair. Although she was intelligent and clever, suspicions grew around Greenhow and Head of U.S. Intelligence Service Allan Pinkerton had her followed and eventually put under house arrest. She and her young daughter, Little Rose, were transferred to the Old Capital Prison where she continued to send encoded messages and collect secret information. Greenhow was still had notoriety, so much so that a photographer from Mathew Brady's studio photographed the mother and daughter together. After Greenhow’s hearing, she was deported to Richmond, Virginia in May, 1862.

Ms. Lapisardi was in character from her arrival until after her presentation, when she answered many questions from the audience. She had brought copies of her new book, Rose Greenhow's My Imprisonment: An Annotated Edition, which she has researched for over 20 years and continues to edit as she learns more information on the fascinating Greenhow. The performance was mesmerizing and a great start to the SVCWRT again holding live meetings. 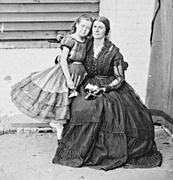 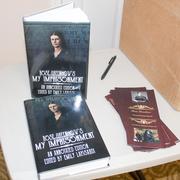 The next meeting of the SVCWRT will be on September 13th, 7:30pm at the Sunnyside Room. The speaker is Arthur Candenquist and in November, Dr. Kenneth Rutherford will be presenting. More details on these meeting will be on Sunnyside-Times and in the Funside. All residents are welcome to attend!